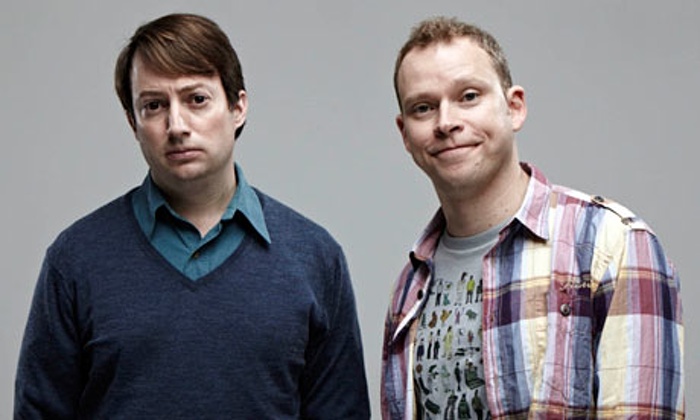 Peep Show is back.

It’s been a while. Three years in fact, since the last series of Peep Show(Channel 4). They – Mitchell, Webb, writers Bain and Armstrong – have become busier and more successful, creating, procreating etc, since this all started.

Where were we, then? Oh yes, Jeremy hit on Mark’s girlfriend, Dobby, and she ran away to New York. So Jeremy ruined Mark’s life. Par for the course, really: they’ve being ruining each other’s lives all along, locked in an awkward PoV man-hug of mutual disgust but unable to let go, each dragging the other down to their own little part of hell.

Just six months have passed in Peep Show time. They – Mark and Jeremy – are reunited for Super Hans’s stag do. What? Super Hans is settling down, marrying an actual woman, as opposed to a narcotic substance? That’s ridiculous. Imagine if he too procreated and became someone’s father! Well, at least, the stag should be a giggle, one last blast of depravity …

No! He’s detoxing for the wedding. They’re only doing – and only talking about – juice. Sober Hans. The stag is, as Jez says, “one load of PG-rated, Disney-assed, Which? magazine- approved, childproof, high-vitamin fucking bullshit”. Well, for about five minutes, until resolve inevitably crumbles; they have a little sip of lager, just to wet the whistle. Then another, and next thing you know they’re all in the toilet, singing filthy songs, Jeremy’s hitting on the barmaid, whistles well and properly sodden. Back to normal, then back to Super Hans’s flat, where Jeremy now lives, in the bathroom. “I mean it’s not Number One Hyde Park Palace, but it suits me down to the ground,” says Jeremy. Until Hans comes in for a Number Two Hyde Park Palace, so to speak, in Jeremy’s bedroom/kitchen. Then it’s disgusting.

Matt King’s Super Hans is everyone’s favourite, right? One of the comedy supporting characters/performances of the century so far, up there with Michelle Gomez in Green Wing. Here’s hoping he’ll feature as much in the rest of the series as he does in this episode. And that he’ll give up this juice nonsense.

Mark also has a new flatmate of his own, from the sort of bank where he now sort of works. Jerry, he’s called, to make things even more hurtful for Jeremy. “I’m the new, improved you,” Jerry gloats to Jeremy. “Total fucking arsehole,” is what Jeremy calls Jerry. Which is about spot on: Jerry is into William Morris, the socialist wallpaper fella, and reading books. What a TFA!

It’s Jerry v Jeremy then, in the fight for Mark’s affection (spare room). There’s only going to be one winner, especially when Super Hans – who wants Jeremy out of his bath or his marriage will go tits-up before it’s even started – shows up. Lovely from Tim Key as Jerry, by the way, while he lasted.

All back on then, Mark and Jeremy, for one final series. They can’t help it, they are drawn inexorably and inevitably together. Underneath the mutual destruction, the bickering and sordidness, there’s mutual dependence, the tiniest ember of genuine warmth, of companionship, of – whisper it – actual friendship.

Also a hint of truth; maybe you’ve got a friendship a bit like that, a relationship or a marriage? No? I see quite a lot of both in myself, worryingly. Even if you don’t recognise yourself in them you’ll recognise theirs as a special relationship, perhaps only ever really rivalled – in television comedy – by Beavis and Butt-head.

There are plenty of other, smaller truths. Like, an evening without either booze or television is a very long evening. And everyone hates futons. You don’t? Yes, you bloody do, everyone does. And they’re indestructible, so they’re here for ever.

It’s both sad, and right, that this is the final series of Peep Show. Sad because it has been brilliant, properly original, very funny, but somehow a little wise and, at times, even touching. Also so very of its time, with its voyeurism, nastiness, thinking- out-loud and point-of-view self-absorption and self-obsession, to the point where you could say it has captured a generation. Which is also why it’s right that it’s coming to an end; that time won’t last for ever, the generation is growing up; even Super Hans, maybe. Not quite yet, though.

First Jerry needs to be bagged up, in his green sleeping bag, drawstring drawn, like The Very Hungry Caterpillar. Then waterboarded, with beer! And sent down in the lift. Ha!